Bialystok. Does the name ring a bell?

Some of you, interested in geography and history (or just simply being Polish) might know that Bialystok is the city in northeastern Poland, the capital of Podlasie Province. If you would like to find out more facts, reach to Wiki. The others might make a connection towards famous bialy, a chewy yeast roll similar to a bagel (Tony Soprano’s favorite snack) or Max Bialystock, a washed-up Broadway producer from The Producers, dark comedy by Mel Brooks.

To my shame I knew only a bit more, when I started my cooperation with The Ludwig Zamenhof Center, a cultural institution from Bialystok. Zamenhof (1859 –1917) was a Polish doctor, linguist, and the creator of Esperanto, the most widely spoken constructed international auxiliary language. LZC was founded to celebrate the organization of the 94th World Congress of Esperanto, officially it opened for the visitors on July, 2009. Today, LZC presents a permanent exhibition – Bialystok of Young Zamenhof, also it organizes temporary exhibitions, concerts, film projections, theatre performances, panel discussions, lectures, literary promotion and various workshops for children and teenagers. From time to time LZC introduces social and educational projects. In other words: they do a lot and they do it with a nice, modern and creative touch. The Head of this institution is Jerzy Szerszunowicz – as I found out later, a person of many crazy and courageous ideas. 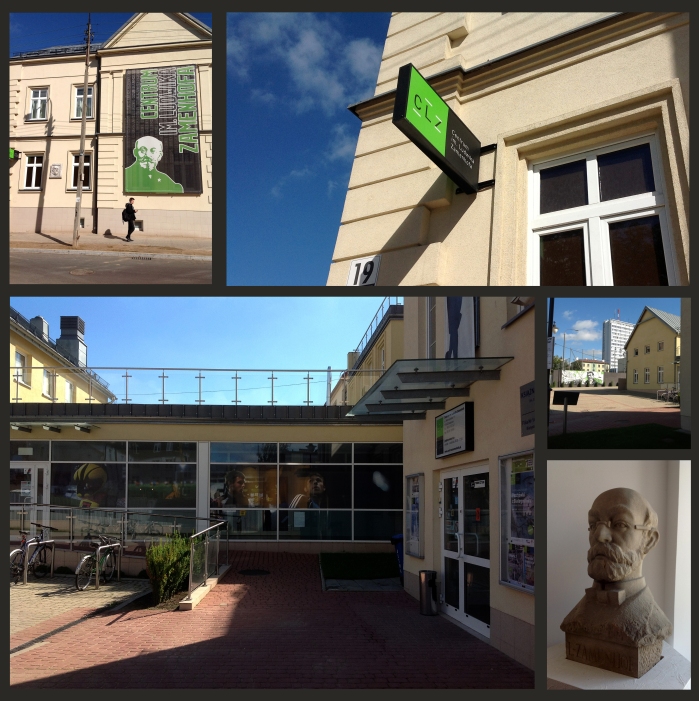 A year ago I send my portfolio to LZC, simply because I really liked the things they were doing and I was thinking it would be cool to make a project together. I was interested in exhibiting my painting there, especially “Forest Demons” series. The person that answered was Ania Talarczyk, responsible for creative and educational projects in LZC. She asked me if I would be interested in making illustrations for the educational project called: “Religions of Podlasie”. My answer was yes – the idea behind the workshops and a book was honest and fair. On this subject I’ll write more a bit later (the book has a premiere on October, 2012). In this post I want to tell you about the second project, LZC offered me – a comic book about Bialystok. This offer resulted with “Postcards from Bialystok” – 48 page graphic novel (ISBN 978-83-932491-8-3), designed by Cris Loghin, Romanian designer and typographer.

“Postcards From Bialystok” is a very different comic than two others. The script does not base on a plot. It’s a kind of an emotional, very personal documentary. Most of the content is not fictional – it bases on what I’ve experienced during my two week’s stay in Bialystok, on May, 2012. The only thing that brings “Postcards” closer to my previous works is a technique: acrylic on canvas paper, my favorite. 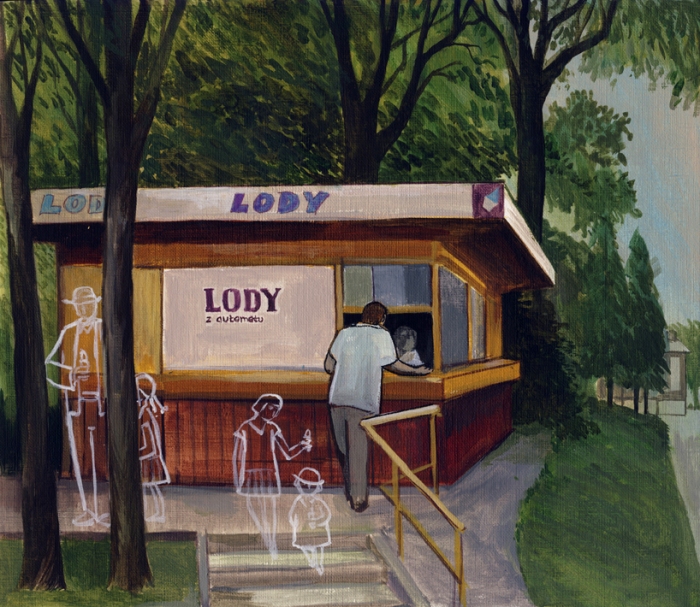 The book contains 19 autonomic stories, placed on a spreads. Each of those is an impression of what I’ve experienced during my long walks around the city. I was living in a private apartment, with young people, local students – which also helped me a bit in sinking into the “real life of Bialystok”. Every day I walked from 10 to 15 K, wandering not only in the center, but also around different subdivisions of the city, sometimes those were distant, almost suburban areas. In my backpack I had one of those paper maps (love those, hate digital ones) and a sketchbook. Map helped me to find my way, sketchbook – to remember the feeling, gather thoughts and capture the ideas in quick drawings or even the storyboards of a spreads. I’d like to show you a few spreads and sketches, and tell a bit about the story, so you can grasp the whole book atmosphere. 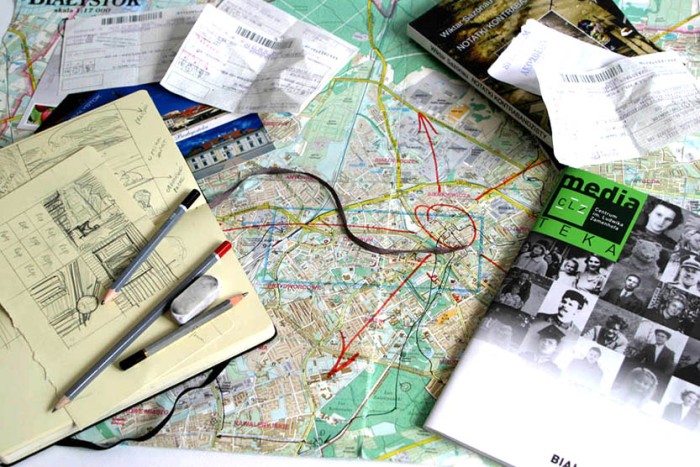 Some of the stories, like “Going to Bialystok” (above) refer to the problem of racism and a myth of multiculturalism in Bialystok. When LZC invited me to Bialystok I tried to prepare myself, mostly reading about the history. I had this vision of Bialystok as a melting pot of cultural influences. Maybe because of “Religions of Podlasie” – a book, which presents five religions, historically connected to the region (Catholic, Orthodox, Judaic, Islam and Protestant). Maybe because of the fact that official website of the city is also praising the idea of multiculturalism. 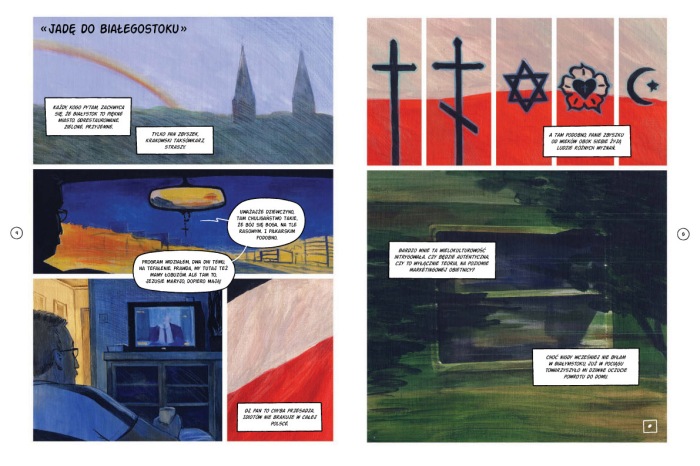 To understand better the specifics of the city let’s reach to Wikipedia: “In the early 1900s, Białystok was reputed to have the largest concentration of Jews of all the cities in the world. In 1931, 40,000 Jews lived in the city, nearly half the city’s inhabitants. […] (Today) the city is the seat of the Roman Catholic Archdiocese of Bialystok. […] The city is also the seat of the Bialystok-Gdansk Diocese of the Autocephalous Polish Orthodox Church. Bialystok is the largest concentration of Orthodox believers in Poland. In Bialystok, the following Protestant churches exist: a Lutheran parish, two Pentecostal churches, Baptist church, a congregation of the Church of God in Christ and a Seventh Day Adventist church.”

To tell the truth, from what I’ve experienced, the idea of the multiculturalism is the most alive on the cemeteries of Bialystok. The memories of Jews are mostly deeply hidden or kept alive by “the last guardians”. Yet, you can still feel their presence in the city, they are a missing element of Bialystok, not only to me. I referred to this feeling on the pages presented below. 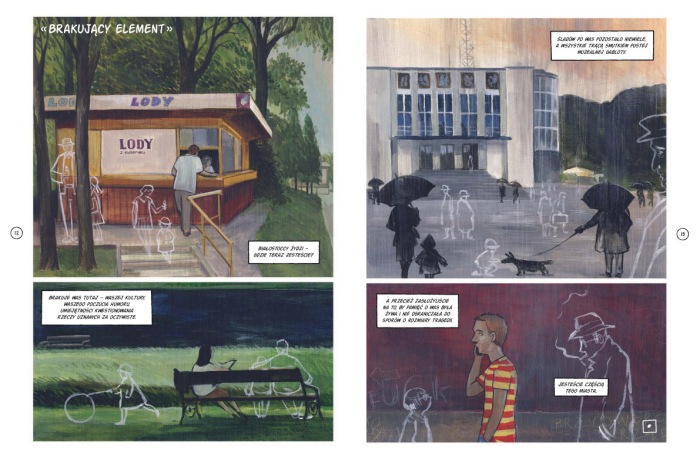 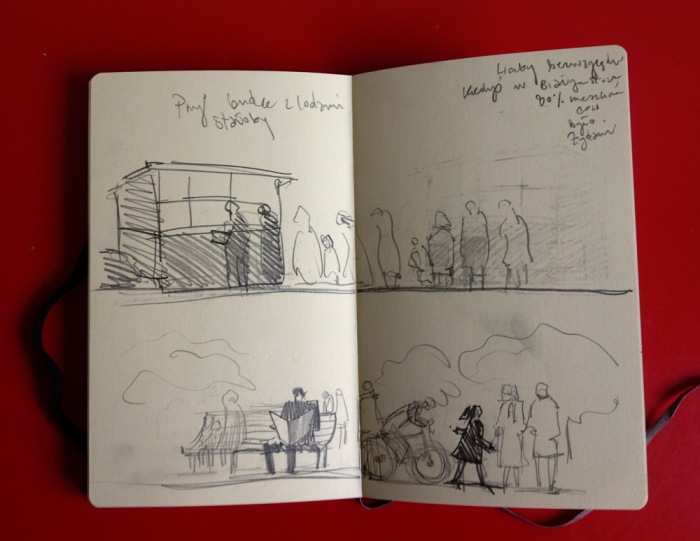 The idea of “The Missing Element” in my sketchbook

In the city you can see a dominating Catholic Church and, strongly connected with the eastern tradition, Orthodox Church. Polish Tatars and small refugee community coming from Chechnya are co-creating Muslim community, but you can’t see women in burkas on the streets.  Possibly because of a series of racist and xenophobic incidents, that occurred in Bialystok within the last years (you can read more here).  While I was wandering around the blocks a few times I was asked: “Who do you stand for?” by the local football supporters of Jagiellonia Team (although word: hooligans probably suits better). Nothing happened to me, but I wouldn’t recommend that kind of walks to the foreigners. One of the spreads  (below) expresses my point of view on the hypocritical face of associated football and everything that happens around it. 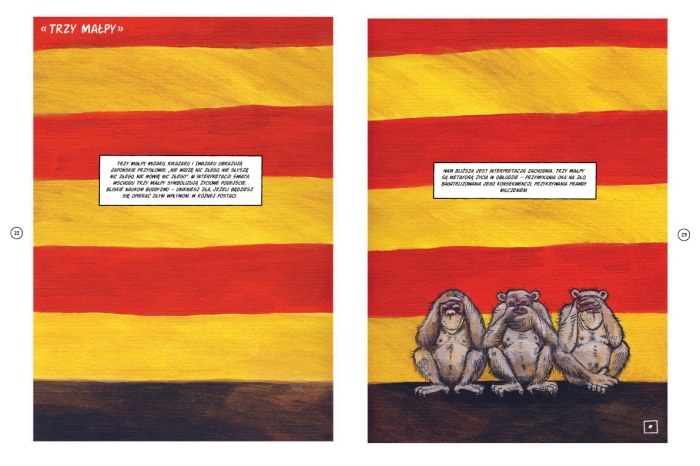 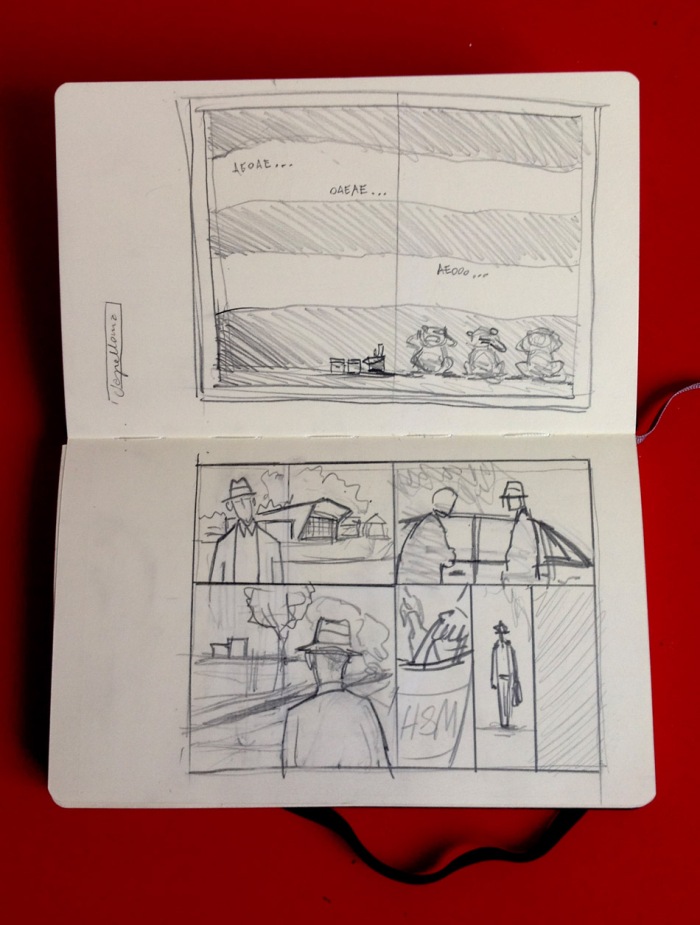 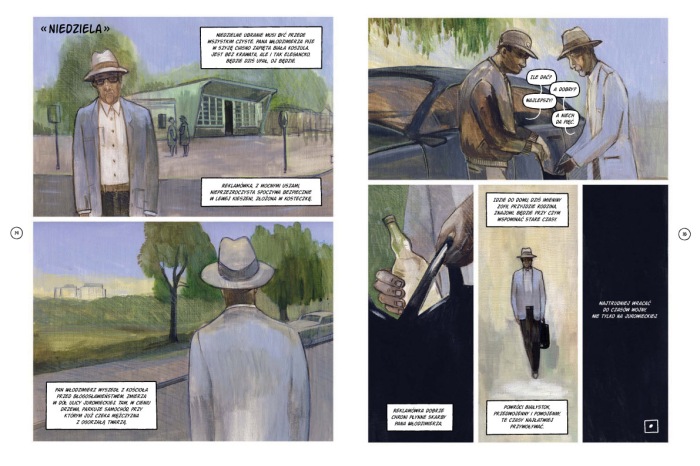 There are also some other topics I wanted to point in “Postcards from Bialystok”. Some of them serious, like the memories of war – heavily hanging over the heads of the ones that still remember (above). Some are about time passing and changes – like the one below, about disappearing old part of Bialystok, called Bojary. 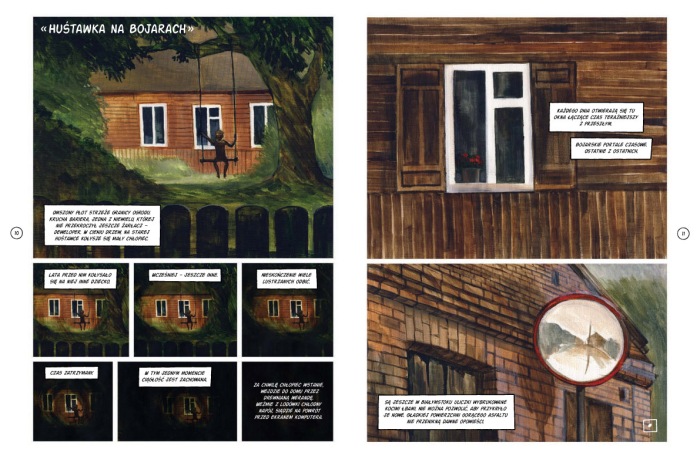 “Postcards From Bialystok” – spread entitled “The Swing at Bojary” 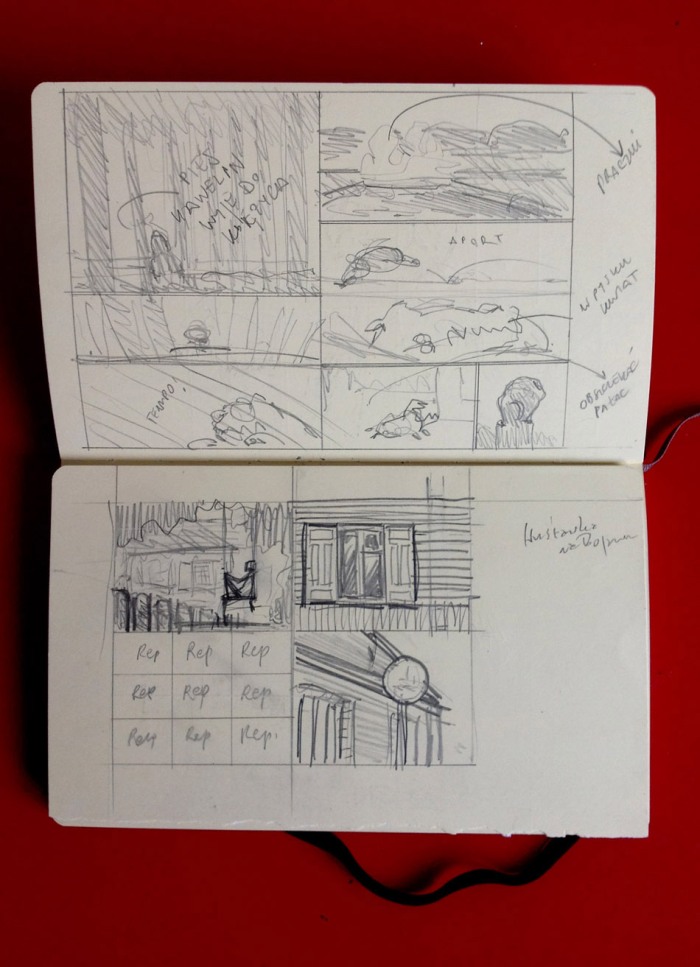 Some of the stories are just simply warm, connected to people or the local atmosphere – like the one with a dog nicknamed Kawelin – which is actually a sculpture in a park (below). I had a dream that it came to life and was playing around with the other sculptures. 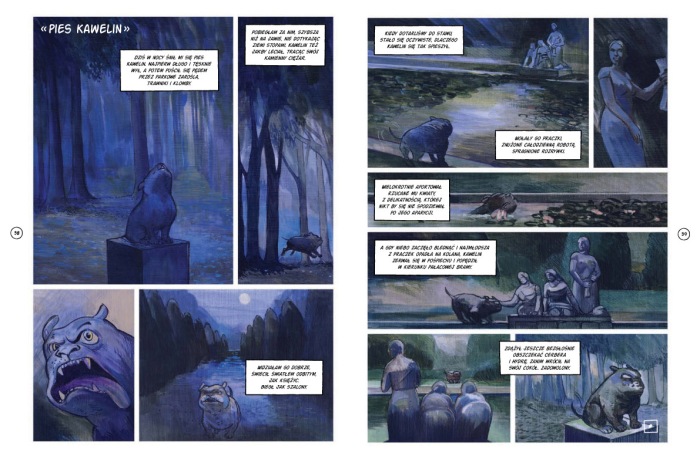 In the book you can also find the impressions on famous bialy’s or Esperanto. 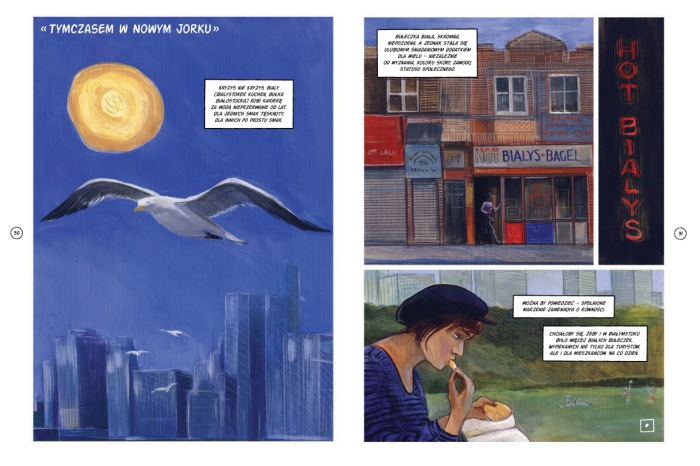 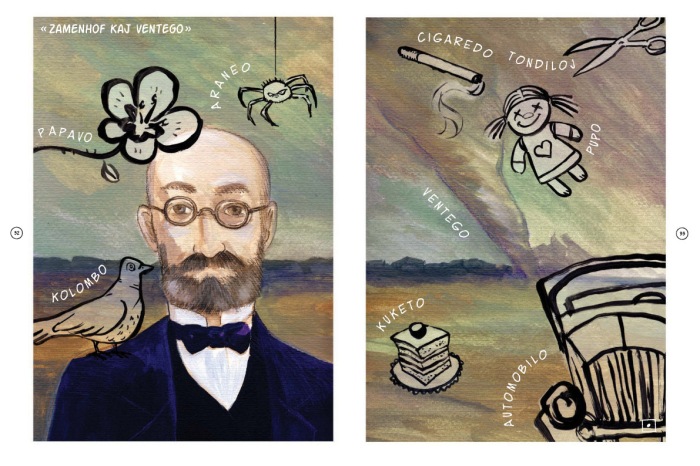 I’ve pictured Zamenhof with a tornado – in my opinion it reflects a mood of his times and maybe a bit symbolizes the pressure that forced him to look for something that will unify people of different goals and beliefs – Esperanto, the language of hope. 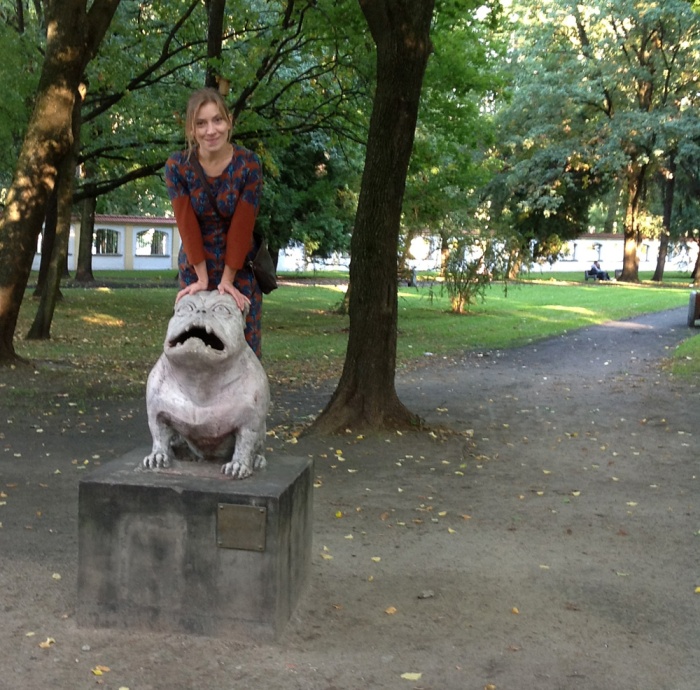 And here is me, with Kawelin, the dog in a Planty Park.
Bialystok, September 2012.